Run the Jewels, also known by the initials, RTJ, is an American hip hop super-duo composed of Brooklyn-based rapper and producer El-P and Atlanta-based rapper Killer Mike. They released their critically acclaimed self-titled debut studio album as a free download in 2013 and have since released the follow-up albums Run the Jewels 2 (2014), Run the Jewels 3 (2016), and RTJ4 (2020),[a] all of which have been released for free and received critical acclaim.[1]

El P was active professionally in music from the early 1990s, first with Company Flow and then as a solo artist and in-demand producer for others. Killer Mike's recording debut was in 2000 with Outkast on the Stankonia album, and his solo debut appeared in 2003.

The duo were first introduced to each other by Cartoon Network executive Jason DeMarco in 2011.[2] El-P later produced Mike's 2012 album R.A.P. Music, which was soon followed by Mike's appearance on the track "Tougher Colder Killer" from El-P's 2012 album Cancer 4 Cure. When R.A.P. Music and Cancer 4 Cure were released within weeks of each other, the two decided to tour together. The success of the tour eventually led to the decision to form Run the Jewels,[3][4] with the duo taking their name from a lyric in the 1990 LL Cool J song "Cheesy Rat Blues".[5]

On June 26, 2013, Run the Jewels released their self-titled debut album on Fool's Gold Records as a free download.[6] They also released "36" Chain" as a free track as part of the 2013 edition of the yearly Adult Swim Singles Program. 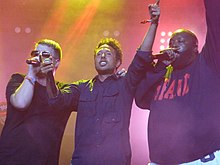 Run the Jewels 2 was released through Mass Appeal Records on October 24, 2014.[7] A light-hearted remix album composed entirely of cat sounds titled Meow the Jewels was released on September 25, 2015.[8] It features guest production from the likes of Prince Paul, Boots, Geoff Barrow, Zola Jesus, The Alchemist, Just Blaze and others.[9] Proceeds from the album went entirely to charity.[10] They also announced the release of a traditional remix album of Run the Jewels 2 which was to be released via Fool's Gold Records in 2015.[11] Like the previous year, Adult Swim released the 2014 edition of their compilation, which saw the release of the lead single from Run the Jewels 2, "Oh My Darling (Don't Cry)", while the non-album single "Rubble Kings (Dynamite on the Street)" was released in 2015.

Killer Mike revealed that the duo would begin work on Run the Jewels 3 in January 2015.[15] Run the Jewels released an exclusive 12-inch on April 18, 2015 in conjunction with Record Store Day. The record included a new track ("Bust No Moves" feat. SL Jones) in addition to three previously-released songs.[16]

February 6, 2016, the duo performed three songs ("Talk to Me", "Legend Has It", "A Report to the Shareholders") for NPR's Music Tiny Desk Concert.

At some point in the future they are going to try and label us a political rap group, and that we are not, we do not care what political party you belong to, we don't care who you supported, we don't care what you are doing tomorrow politically, we care that socially every one of you know: you are absolutely born free and nothing has a right to interrupt that freedom. We love you.

August 24, 2016, DJ Shadow's single "Nobody Speak (feat. Run The Jewels)" was released, featuring a music video of brawling politicians just before the 2016 election. This song has been featured in several TV shows and movies.[23] The song was produced by the Mass Appeal record label and DJ Shadow, which he calls the standout track on his album The Mountain Will Fall. The duo were extras in the video. The video was directed by Sam Pilling. produced by Pulse Films, and starred Igor Tsyshkevych and Ian Bailey. It was shot in NYC, London and Ukraine.

Run the Jewels 3 was digitally released on December 24, 2016,[24] three weeks prior to its previously announced release date of January 13, 2017.[25] Physical release of the album appeared on January 13 in the United States and January 20 elsewhere.[24][26] In the same month, Adult Swim’s late-night anime block Toonami promoted the album by replacing regular music with tracks from the album.

On December 12, 2019, the single "Legend Has It" was certified gold by the Recording Industry Association of America.[32]

On October 11, 2018, Run the Jewels released a new song titled "Let's Go (The Royal We)", which was featured in that year's superhero film Venom and debuted on Zane Lowe's Apple Music's Beats 1 show. It was also confirmed that their fourth album was in the works.[33]

On March 22, 2020, Run the Jewels released "Yankee and the Brave (ep.4)" as the first single from RTJ4.[34] Four days later, they released the second single, "Ooh LA LA" (featuring Greg Nice and DJ Premier).[35] The album was released digitally on June 3, 2020, two days earlier than their announced released date of June 5, with a physical release in September 2020.[36] It was their first album to be officially titled under its abbreviated name as opposed to the formatting of previous albums, which would have rendered the title Run the Jewels 4.[37] On June 6, as they had done with the preceding album, Toonami once again promoted the album by replacing regular music in their promos with music from the album. In July, the duo announced the release of their own cannabis strain with a "sweet fruit cake [taste] with a herbal tea finish", named after their single "Ooh LA LA".[38]

In an attempt to increase voter turnout for the 2020 elections, Run the Jewels performed RTJ4 in its entirety from a warehouse during a YouTube stream titled Holy Calamavote (a reference to their song "Holy Calamafuck") on October 18.[39] Hosted by Eric Andre in the style of a parody telethon and sponsored by Adult Swim and Ben & Jerry's, the performance featured appearances from all of the collaborators on the album, with some appearing in person while others appeared via pre-recorded performances played on large screens in the background.[39]

Alongside several other artists, Run the Jewels provided music for the video game Cyberpunk 2077, released in December 2020.[40] One month before the game's release, they released a song they wrote for the game called "No Save Point", accompanied by a music video which shows them performing the song within the game's world.[41] They were credited as Yankee and the Brave for this song.[42] Around the same time, the video game Spider-Man: Miles Morales was released, which features an instrumental version of "The Ground Below" from RTJ4 in the background during a mission.[43]

The official release for RTJ4 was June 5, 2020. The duo announced on June 3 that they were also giving out the album for free and that it is streamable.[1]

As part of the promotion for Run the Jewels 2, the duo started a "Tag the Jewels" movement encouraging graffiti artists from around the world to tag their rendition of the duo's signature "pistol and fist" hand gesture, as featured on all of their album covers.[44] 30 artists were invited to participate in the movement, creating large murals on six continents.[45][46] The same "pistol and fist" gesture was featured on the covers of several Marvel comic books since 2015. Marvel editor-in-chief Axel Alonso was the driving force behind the gesture's incorporation into variant covers for Deadpool #45, Howard the Duck #2, Deadpool's Secret Secret Wars #1,[47][48] Black Panther #2, Cage #1 and Doctor Strange/Punisher: Magic Bullets #1 variant. In the video game Borderlands 3, one of playable character FL4K's pets will throw up the duo's "pistol and fist" gesture when interacted with. In the video game Gears of War 4, a promotional skin bundle featuring Run the Jewels as playable characters was released in early 2017.