Mustasch was formed in Gothenburg in 1998, and recorded demos at "The Mustasch Farm" on the island Orust which were released through different record labels around the world in small numbers. In 2001 they released their first EP The True Sound of the New West, embarked on a tour, and started to make a name for themselves in the Swedish metal scene. They chose the name Mustasch because many of their musical heroes had moustaches; such as Freddie Mercury from Queen and Tony Iommi from Black Sabbath.[1]

The band went on to release Above All in 2002 and Ratsafari in 2003, both of which were nominated for Swedish Grammies and helped the band to build their reputation. The band continued to tour hard, and released Powerhouse in 2005 before switching record labels. The switch to Regain Records was made to get the proper channels to sell metal records and the fact that the label was based near Gothenburg.[2]

With their new record label, they were given complete creative control[3] and in 2006 they released an EP entitled Parasite! It was soon followed up with their 2007 album, Latest Version of the Truth, which led to their first Swedish Grammy award after being nominated twice in the past. Following the album's release, the band postponed further recordings, instead favoring an extensive touring schedule to promote themselves; this also led to the release of the compilation album Lowlife Highlights.[3]

In June 2008, guitarist Hannes Hansson announced that he would leave the band due to family reasons: "It's been a fantastic period of ten years with the band, but now the band has grown so much with touring all over the world. It takes too much from my family and other things in life which I now want to put all my priority to."[4]

The band continued their scheduled tour with various replacements before David Johannesson from Swedish metal band Sparzanza was chosen as a permanent replacement.[5]

In late-spring 2009, Mustasch started to work on their new album, also announcing that drummer Mats 'Dojan' Hansson had left the band because of arthritis; Danne McKenzie, who had played with the band on numerous occasions, took the spot. In August 2009, the band announced that they had finished recording their new album, entitled Mustasch, and that it will be released on 30 September in Finland and Sweden, 5 October in Denmark and Norway, and the rest of the world in early 2010. The first single from the album is entitled "Mine".

In November 2011, the band made the song "The Challenger", which became a hit. It made a breakthrough in all of Scandinavia, and will go global with their new world-tour.[citation needed]

They participated in Melodifestivalen 2021[6] with the song "Contagious", which failed to qualify from the semi-finals.

In August 2019, Mustasch teamed up with Mental Illness Charity (Mind.se) to highlight issues of suicide rates among young men. They launched a campaign to help tackle this issue. Talking about their new single "What Is Wrong" (which is also the name of the campaign), singer Ralf Gyllenhammar said, "'What Is Wrong' is our fight song for young men suffering from mental illness. Men are expected to be strong and dare not seek help. We want to change that in Mustache [sic]. That's why we are now starting the #whatiswrong campaign. Our goal is to raise SEK 200,000. That amount allows Mind's volunteers to receive 600 calls from support applicants in the Suicide Line. It is conversation that saves lives."[7] 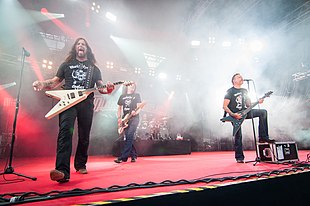