Cargo is the second studio album by the Australian pop rock band Men at Work, which was released in April 1983. It peaked at No. 1 on the Australian Kent Music Report Albums Chart, No. 2 in New Zealand, No. 3 on the United States Billboard 200, and No. 8 on the United Kingdom Albums Chart. Four singles were released from the album, with "Overkill" being an international top 10 hit in Canada, Ireland, Norway, and US Billboard Hot 100. This was the final Men at Work album to feature the original lineup. 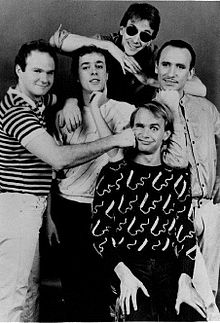 In Smash Hits, Fred Dellar praised Cargo as "an immaculately constructed album of outback pop for in-front people".[11] Rolling Stone's Christopher Connelly wrote that Cargo "may lack a track with the body-slamming intensity of 'Who Can It Be Now?' and 'Down Under', but song for song, it is a stronger overall effort than Business as Usual". He chiefly praised the album's dark, paranoid lyrics.[10] John Mendelssohn of Record also felt that none of the tracks measured up to Men at Work's early hits, but went further, saying the album in its entirety is inoffensive but forgettable, with "Upstairs in My House" being the only highlight. He found the band's instrumental solos particularly dull, and assessed that Men at Work's one asset is that "Colin Hay may be the most effortlessly soulful pop singer since Sting".[12]

In a retrospective review, AllMusic's Stephen Thomas Erlewine praised "Overkill" and "It's a Mistake" as "demonstrating more depth than anything on the debut". However, he asserted that the album parallels their debut in that it focuses on two strong singles while it is "weighed down by filler".[8]